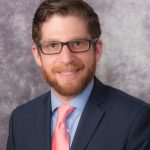 Evan serves as Director, Operations in the Department of Orthopaedic Surgery at UPMC where he is responsible for daily oversight of five outpatient clinics and a dedicated scheduling department. Prior to accepting this role Evan completed an Administrative Fellowship at UPMC in the Health Services Division Pittsburgh Track, where he held an interim role as Director, Special Projects in Facilities and Support Services.

Evan received a Master of Health Administration from the University of Pittsburgh Graduate School of Public Health in 2017, while also serving as an Administrative Resident at UPMC Mercy in Operations. He received a Bachelor of Science in Policy and Management from Carnegie Mellon University in 2014.

Evan has been a member of ACHE since 2016 and additionally holds volunteer leadership roles at Family House: a non-profit organization serving residents and guests of the Pittsburgh Area, and Delta Tau Delta International Fraternity.

<< Back to officer listing